Children are in danger every time they go to play tennis, warns concerned daddy 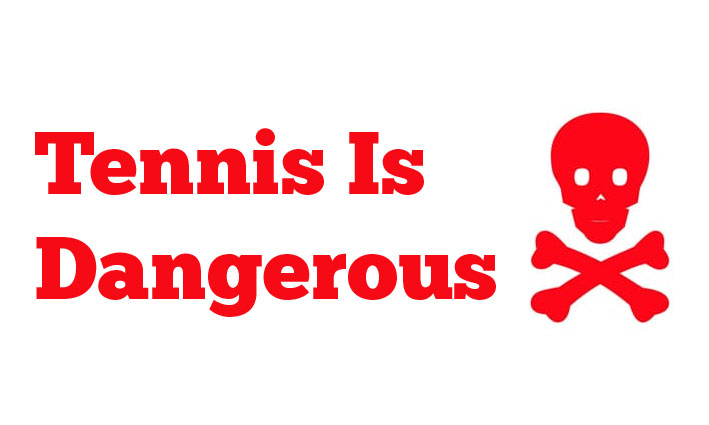 Simon Sharpener’s daddy Stephen was giving evidence to the World Tennis Federation, as tennis officials examine their latest plan to crackdown on the dangers of playing tennis for children.

Children are confronted with “big dangers” every time they go onto a tennis court, the concerned daddy of a schoolboy who recently grazed his knee on a tennis court.

Stephen Sharpener’s son Simon, aged 12.5 years, grazed his knee whilst having a tennis lesson at his local tennis club.

His concerned daddy called on tennis officials to overhaul tennis regulations so children can feel safe again when playing tennis.

Mr Sharpener told the WTF safety committee: “The tennis world is a scary place, current regulations which clearly don’t work need to be changed. Tennis is more dangerous than you think – and that’s a problem for kids who want to play tennis, but they hate grazing their knees – it hurts.”

“Tennis clubs around the world need to make clear the dangers of playing tennis. Not just grazed knees, but also the chances of being hit on the head with a tennis ball by your incompetent tennis partner.”

Outlining his hopes for the new regulations, he hoped a shake-up would “be a return to playing tennis where no one might get slightly injured or come home feel sore. I want tennis clubs to be a much safer place than they are now”.

He said: “We just have to remember that every time we go to play tennis there is a potential danger of something happening. I don’t know what that something might be, but it could happen.”

“I feel sorry for kids of today trying to play tennis, it’s hard enough for an adult like me to go and play tennis without worrying about getting a possible blister on my thumb.”

“I blame the tennis coaches. They push young tennis players into a much darker, dangerous place,” said Stephen Sharpener.

“The amount of times I have seen young kids on a tennis court sweating is frankly frightening. And that’s because the tennis coaches make them run around a lot. Something has got to change.”

“I want the World Tennis Federation to wake up and listen to my concerns. I would prefer my child to be unfit and just playing video games all day, than for them to come home moaning about the latest bruises they got from playing tennis.”

Stephen Sharpener’s suggestions would impose a “duty of care” on tennis clubs, to ensure than any child playing tennis was wrapped up in cotton wool.

Under Stephen Sharpener’s plan, the WTF would be given powers to stop tennis coaches making kids run around and if any child did fall over and scrape their knee, the tennis coach would have to buy the child an ice cream.”

When asked by journalists if the WTF would bring in Stephen Sharpener’s suggestions to protect kids from the dangers of tennis, the WTF legal representative replied “Who the hell is Stephen Sharpener?”