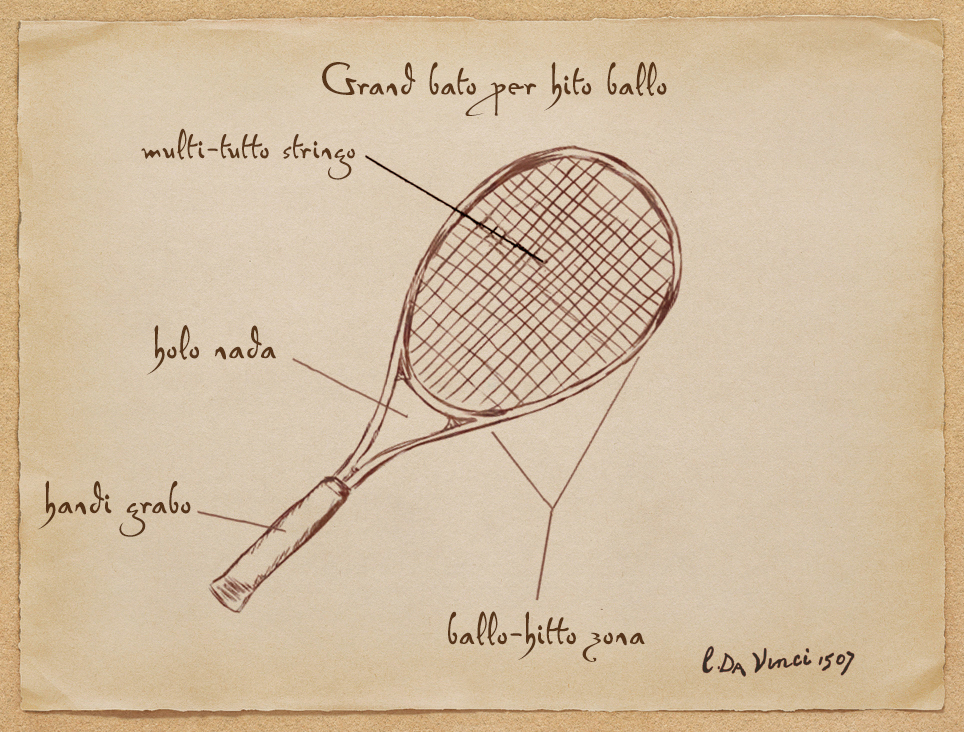 Astonishing news from the USA today, when it was announced at the Library Of Congress that officials had found original documentation to prove that Leonardo Da Vinci invented the tennis racket.

It had always been thought that the original tennis racket that we know today was invented by Major Walter Clopton Wingfield, when he patented the first modern version of the game of tennis in 1874. With this new information, it now appears the tennis racket was invented over 350 years before originally thought.

The chance discovery only came to light when a researcher at the Library of Congress was thumbing through a car repair manual for a Fiat Panda, in its original Italian version – when they found some old papers inside the book. Upon examination these documents seem to show the original drawings by Leonardo Da Vinci back in 1507.

The documents were initially thought to be fake, but after being inspected by the world famous Leonardo Da Vinci expert – Mrs Desiree Dots from the Nigeria University of Nigeria – she confirmed “Yes this is all true, I know it is true. Do not argue with me. It is true. I am off now. Leave me alone.”

The Italian Ambassador To Washington Antonio Toni Bribaro said ” We are very happy for this news – Leonard Da Vinci, or as we call him in Roma ‘Loco Leo’ because he make so many crazy inventions – we know he invented tennis racket and bouncy balls – most Italians think he also invented baseball, cricket, swimming and formula one car racing – but we dont have proof yet.”

The search is now on to try and find the original documentation that shows Leonardo Da Vinci also invented the tennis ball. Because as officials at the Library Of Congress have said “why would a genius like Leonardo Da Vinci invent a tennis racket and then not invent some tennis balls. It is obvious he did also invent tennis balls, we just have to find the proof. Our aim is to now start searching through every Italian car manual we have on site as that seems to be where all his long lost documentation has been hidden.”