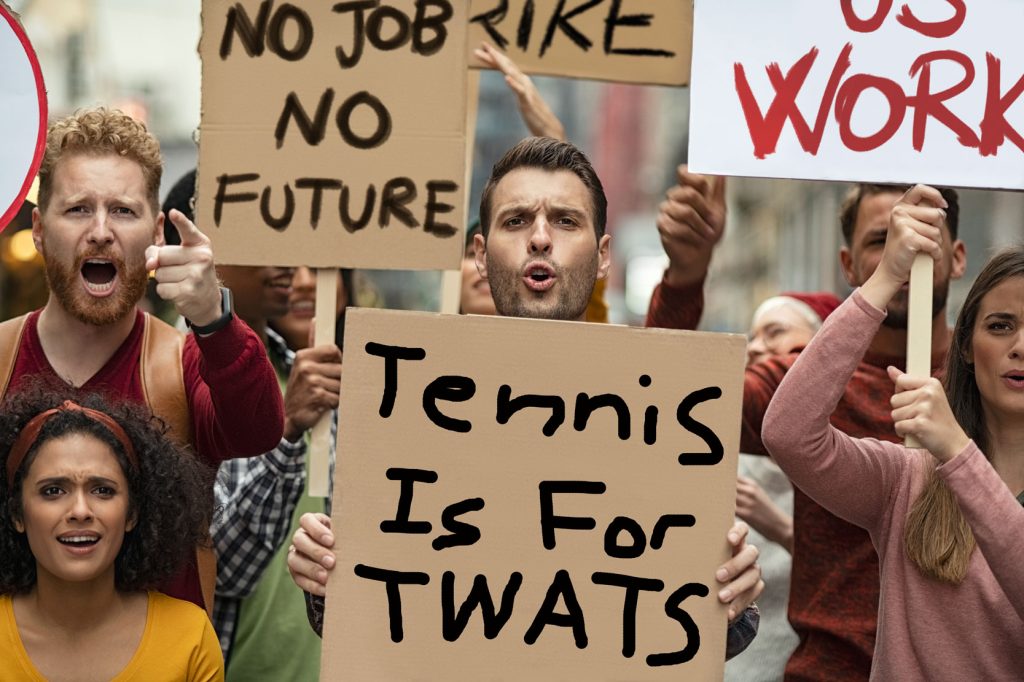 Tennis players are being told only to play tennis if necessary during the latest national strikes by tennis club workers.

Some 75,000 members of the Militant Union (MU)working at tennis clubs will walk out on Thursday.

It comes after talks over pay, jobs and terms and conditions failed, following last months tennis strike – the biggest tennis strike in over 100 years.

World Tennis Federation (WTF) said only 20% of tennis clubs will be open and some areas will have no tennis clubs open at all on Thursday.

For example, there will be no tennis clubs open in Guatemala, Oregon, Cambodia and Dorset.

In a bid to minimise disruption, the WTF has published a special timetable for Thursday, with tennis clubs set to open later and finish earlier than usual.

General secretary Michelle Scargill of the Militant Union said the union would continue to try to reach a deal with the WTF ahead of Thursdays walkout.

“I wanted to get a breakthrough, so then we wouldn’t have to take strike action, but there’s a mega gap between the parties at the moment,” she said earlier today.

“So I’m are going to tell tennis players, you ain’t going play any tennis on Thursday.”

All tennis clubs, will be affected by the strike on Thursday. The knock-on effects of the disruption are expected to roll in to Friday and may even effect Saturday afternoon tennis club social events.

Tennis players with any advance court bookings for Thursday can change it to the day after – WTF officials said.

Bernard Sanctie, WTF chief executive, said: “Despite our best efforts to find a breakthrough, I’m afraid there will be more disruption for tennis players this week as the Militant Union is determined to continue their political campaigning, rather than compromising and agreeing a deal for their tennis club members.”

The WTF said it was “now clearer than ever” that the Militant Union has “no interest in engaging in constructive dialogue and is set on creating marxist misery for tennis players, both old and young”.

“This action is a purposely timed attempt to mess up Thursday evening tennis events, one of the major days on which people play tennis.”

“We continue to encourage this militant union to stop playing silly buggers and just do the right thing and call off the strikes, but I know they won’t because they are all wankers.”

Are You Affected By The Tennis Strikes?
If you are, we want to hear from you. Send us your messages in the comments below and tell us if you intend to go and play golf instead this Thursday?