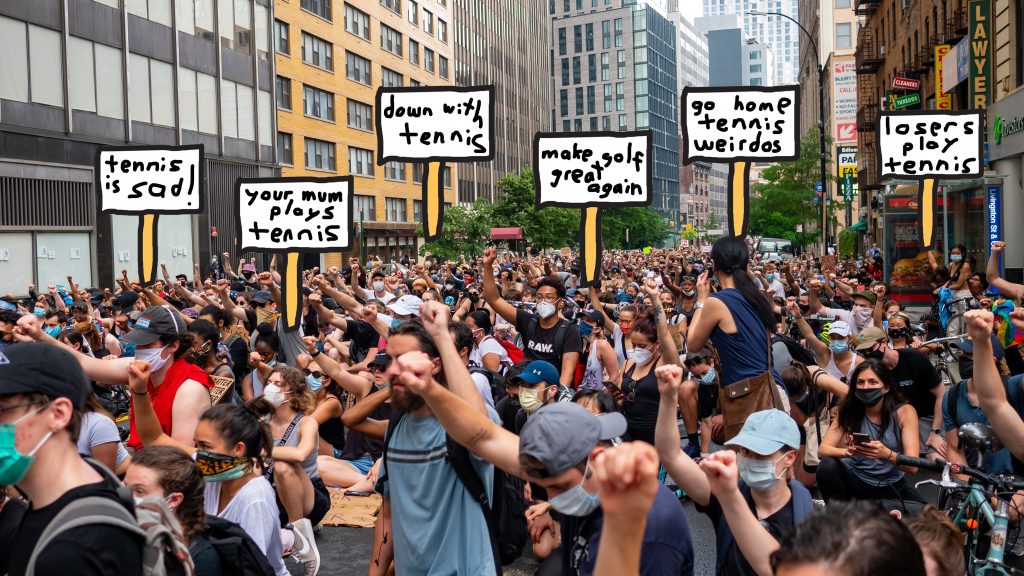 Anti-tennis protesters have occupied the headquarters of the World Tennis Federation in central Paris on Tuesday morning, the latest in a series of actions aimed at getting the sport of tennis banned.

Top tennis journalist, Peter Everard was chased into one of the WTF building’s side entrances by conspiracy theorists shouting at him that he was “a tennis loser”.

Live mobile phone footage showed millions of protesters shouting scientifically unsupported claims about the damage tennis is doing to society and blaming the media for promoting so-called “tennis is safe”, which they claim is just totally silly.

After marching from Stockholm 4 weeks ago, the protesters finally arrived in Paris yesterday and headed to the WTF headquarters. The protesters were met by 17 uniformed police officers (aka gendarmes) guarding the WTF’s building’s main entrance. However, the anti tennis protesters were immediately let through a side door, apparently by an anti tennis supporter who was already inside the building and who had been working for the WTF since 2005.

The protesters were then stranded in the building’s reception, separated by a glass wall from WTF tennis officials who were stuck inside their offices, with both groups filming each other on their mobile phones. Eventually, 1 more police reinforcement arrived to help clear the building.

Although the majority of the public like to play tennis occasionally, and recently tennis has seen one of the highest uptake rates in the world, the persistent nature of anti-tennis protests has caused particular concern for WTF officials in the tennis industry.

WTF officials are struggling to work out how to protect their officials from harassment both online and in person, especially following an incident involving when a tennis umpire, Michael Spaniel, had rude words shouted at him when he was shopping for new trousers.

There has been some confusion among anti-tennis protesters regarding which tennis organisation they are targeting. Earlier this month a group of anti tennis protesters gained access to the WTF’s former headquarters in Berlin, which is now used as a bondage sex club.