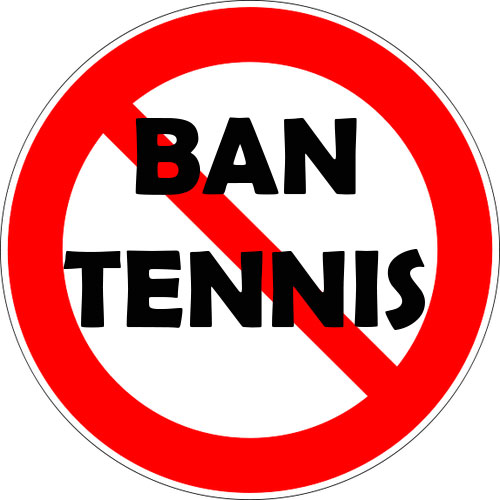 It has been announced that tennis is to be banned in certain parts of the USA from today.

At a meeting last night in the local council hall for Old Bobs County in Alabama, a vote was held with 12 to 4 voting in favour that tennis should be banned.

Even though this ban would only apply in Old Bobs County, there is fear amongst the tennis authorities that this ban could soon spread to other local counties and even USA states.

You might be wondering why would anyone want to ban tennis? Well the reasons given by Mayor Chuck Byron Junior The Third for this ban coming into place are as follows:

This tennis ban will come into effect from midnight tonight and anyone found playing tennis will be fined $50 and could spend up to 22 years in the local jail.

When it was pointed out to Mayor Chuck Byron Junior The Third that in fact there are currently (and never have been) any tennis courts in the Alabama county of Old Bob, he replied “sounds like you are a commie to me – Martha, where’s my gun”